Customers Can Deploy Supermicro Servers for Graphics and Simulation Foundation for Building and Operating Metaverse Applications at Scale— Systems will Support up to 8 NVIDIA L40 GPUs, ConnectX®-7 SmartNICs, and Current and Future CPU Processors from Intel and AMD

The Supermicro OVX server is based on the new L40 GPU in a 4U 8GPU server with dual Intel CPUs, 32 DIMMs, 8TB of memory, 12 PCI-E slots, and up to 24 drive bays. Additional servers that utilize the L40 GPU include a range of systems from Supermicro: the 4U 4GPU rackmount/workstation, the 2U with up to 6GPUs, the 1U 4GPU, and the multi-node 2U 2Node system. These systems all support NVIDIA L40 PCI-E-based GPUs.

“Supermicro is again leading the industry by being first to market with the second generation OVX server,” said Charles Liang, president and CEO of Supermicro. “Our most demanding customers require the integration of the fastest CPUs and GPUs for low-latency, immersive experiences. Our OVX server is designed for creating and operating the most complex Omniverse Enterprise applications at scale.”

The NVIDIA L40 GPUs will be incorporated into Supermicro’s current generation, and the next generations of systems are based on Intel and AMD platforms. Next-generation Supermicro systems leveraging the L40 GPU will include the 4U 8GPU server, the 4U 4GPU server, and 2U and 1U servers and workstations. Each Supermicro OVX server is powered by up to eight NVIDIA® L40 GPUs, bringing the power of the NVIDIA Ada Lovelace architecture to accelerate Omniverse workloads. These systems combine GPUs with three NVIDIA® ConnectX®-7 SmartNICs, high-performance CPUs, and NVMe storage in a unified platform and will be available soon. The next generation of AI applications will require a computing platform optimized for creating graphically rich and physically accurate virtual worlds. Supermicro OVX systems are ideal for supporting this ongoing industry development. 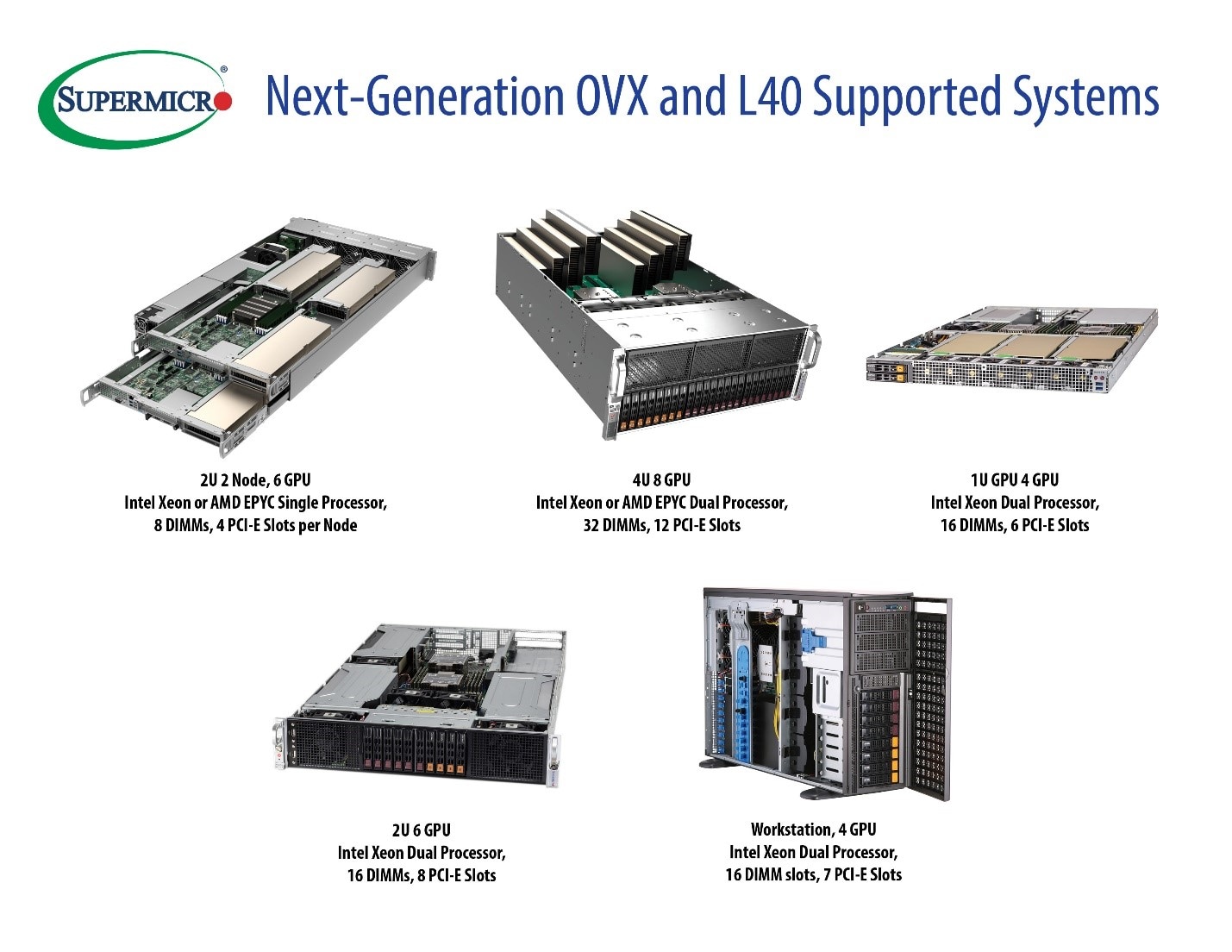 Supermicro (NASDAQ: SMCI) is a global leader in Application-Optimized Total IT Solutions. Founded and operating in San Jose, California, Supermicro is committed to delivering first to market innovation for Enterprise, Cloud, AI, and 5G Telco/Edge IT Infrastructure. We are transforming into a Total IT Solutions provider with server, AI, storage, IoT, switch systems, software, and services while delivering advanced high-volume motherboard, power, and chassis products. The products are designed and manufactured in-house (in the US, Taiwan, and the Netherlands), leveraging global operations for scale and efficiency and optimized to improve TCO and reduce environmental impact (Green Computing). The award-winning portfolio of Server Building Block Solutions® allows customers to optimize for their exact workload and application by selecting from a broad family of systems built from our flexible and reusable building blocks that support a comprehensive set of form factors, processors, memory, GPUs, storage, networking, power and cooling solutions (air-conditioned, free air cooling or liquid cooling).

Supermicro, Server Building Block Solutions, and We Keep IT Green are trademarks and/or registered trademarks of Super Micro Computer, Inc.

All other brands, names, and trademarks are the property of their respective owners.