Supermicro Introduces Over 20 Building Block Solutions to Enable Customers to Select from 8U, 5U, 4U, 2U, and 1U Systems that Support the New NVIDIA H100 GPU to Optimize AI/ML, HPC, and Inferencing Workloads

"Today, Supermicro introduced GPU-based servers with the new NVIDIA H100," said Charles Liang, president, and CEO of Supermicro. "We continue to offer the most comprehensive portfolio in the industry today and can deliver these systems in a range of sizes, including 8U, 5U, 4U, 2U, and 1U options. We also offer the latest GPU in our SuperBlades®, workstations, and the Universal GPU systems. Customers can expect up to 30x performance gains for AI inferencing compared to previous GPU generations of accelerators for certain AI applications. Our GPU servers' innovative airflow designs result in reduced fan speeds, less power consumption, lower noise levels, and a lower total cost of ownership."

Supermicro supports open standards and adheres to open power specifications, providing customers with faster delivery and installation, resulting in faster time to productivity. In addition, Supermicro servers such as the 8U 8-GPU also support AC and DC power in standard and OCP DC rack configurations. 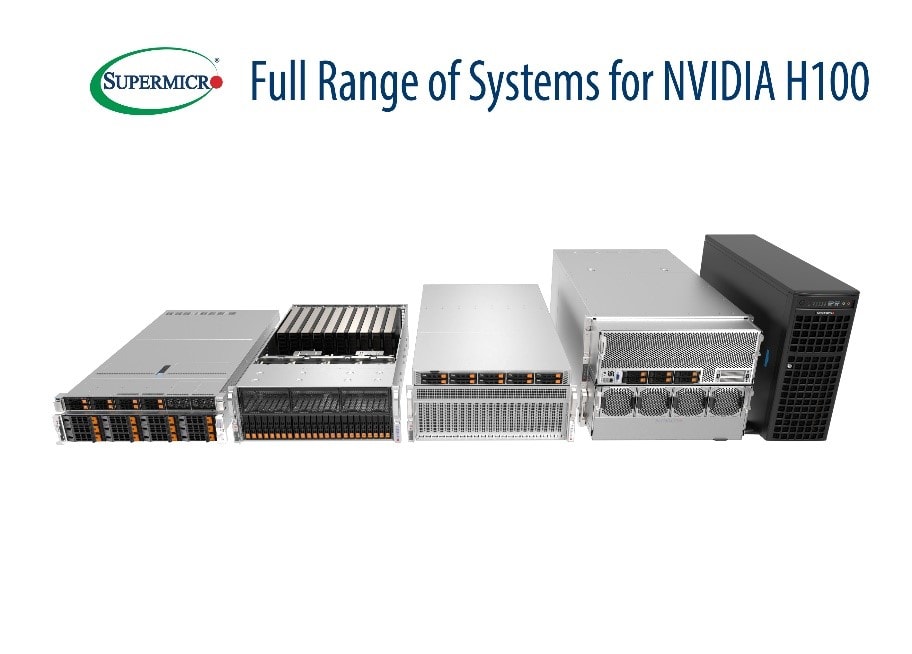 Supermicro (NASDAQ: SMCI) is a global leader in Application-Optimized Total IT Solutions. Founded and operating in San Jose, California, Supermicro is committed to delivering first to market innovation for Enterprise, Cloud, AI, and 5G Telco/Edge IT Infrastructure. We are transforming into a Total IT Solutions provider with server, AI, storage, IoT, and switch systems, software, and services while delivering advanced high-volume motherboard, power, and chassis products. The products are designed and manufactured in-house (in the US, Taiwan, and the Netherlands), leveraging global operations for scale and efficiency and optimized to improve TCO and reduce environmental impact (Green Computing). The award-winning portfolio of Server Building Block Solutions® allows customers to optimize for their exact workload and application by selecting from a broad family of systems built from our flexible and reusable building blocks that support a comprehensive set of form factors, processors, memory, GPUs, storage, networking, power and cooling solutions (air-conditioned, free air cooling or liquid cooling).

Supermicro, Server Building Block Solutions, and We Keep IT Green are trademarks and/or registered trademarks of Super Micro Computer, Inc.

All other brands, names, and trademarks are the property of their respective owners.